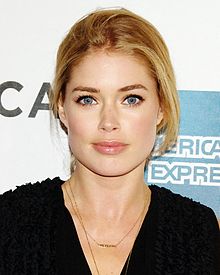 Doutzen Kroes (West Frisian pronunciation: [ˈdʌu̯tsə(ŋ) ˈkrus]; born 23 January 1985) is a Dutch model, actress, activist and philanthropist. She began her modelling career in 2003, in the Netherlands and was quickly sent by her agency to New York where she was cast by lingerie brand Victoria’s Secret. She was a Victoria's Secret Angel from 2008 until 2014.She has been a brand ambassador for L'Oréal Paris since 2006.Kroes has been one of the highest-paid models, with an estimated income of more than $5 million per year, since 2008. In 2014, she came in second on the Forbes top-earning models list, estimated to have earned $8 million in one year. As of December 2015, she was ranked as one of the "New Supers" in the fashion industry and dubbed "Helen of Troy of advertising" byDoutzen Kroes at the 2012 Tribeca Film Festival
Born
23 January 1985 (age 35)
Eastermar, Tytsjerksteradiel, Friesland, Netherlands
Nationality
Dutch
Occupation
Fashion model
actress
activist
philanthropist
Years active
2003–present
Spouse(s)
Sunnery James Gorré (m. 2010)
Children
2
Modeling information
Height
1.79 m (5 ft 10 1⁄2 in)
Hair color
Blonde
Eye color
Blue
Agency
DNA Models (New York)
VIVA Model Management (Paris, London, Barcelona)
Women Management (Milan)
Paparazzi Model Management (Amsterdam) (mother agency)
In 2013, she became the first model to land 4 different solo international covers of Vogue's September issue in a single year.

Her film debut was in Nova Zembla (2011). She is one of the active members to contribute to Dance4Life, a Dutch non-profit organization that uses song and dance to educate youth about HIV and AIDS prevention. She is also one of the supporters of Wildlife Conservation and World Wildlife Fund.